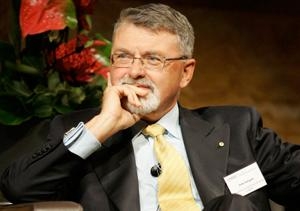 Chancellor of Western Sydney University since 2011, Peter Shergold has had a highly distinguished academic and public service career spanning more than three decades, including serving as Secretary of the Department of the Prime Minister and Cabinet from 2003–2008.Vice-Chancellor and President, Professor Barney Glover AO, paid tribute to Peter’s significant contribution to Australian public life, in particular, his exceptionally strong advocacy for social inclusion and the power of education to open up opportunities for all.

“His leadership and clear vision will undoubtedly affirm the University’s position as an anchor institution for Western Sydney, and ensure it continues to be a catalyst for the region’s economic advancement and social prosperity and a leading advocate for its communities.”

In addition to his role as Chancellor at Western Sydney University, Professor Shergold holds numerous positions including serving as the NSW Coordinator-General of Refugee Resettlement.  He has authored numerous reports and led important reviews for both government and industry, and is a non-executive director, Chair and member of a number of corporate and non-profit boards.

Login details will be mailed to you closer to the event.